Honda introduced its venerable 99 cc OHC single 2-valve upright engine in 1970. This was a direct challenge to the off-road market, which was dominated at the time by two-stroke engines. A tsunami of change was about to ensue as a result of many of its CB, CL, and SL-based models.

In 1973, the first CL125S was introduced, featuring a larger 122 cc piston (which increased low-end torque but added little power) and a slightly larger piston/rod connecting pin. This contributed to the bike's dry weight being reduced to 196 pounds (89 kg). This motorcycle was nearly identical to the CL100 produced from 1970 to 1973, which was essentially a slightly modified version of the CB series produced at the same time. The modifications included a lower rear sprocket gearing, slightly more aggressive tires, a shorter front fender, a braced handlebar, a high mount exhaust system, and the removal of the tachometer and center stand.

The 125S was manufactured from 1973 to 1977, and the 1974 model was only available in Candy Ruby Red with white stripes. According to the seller, the fuel tank on this example has been refinished, while the steel frame and trim have aged. A 1986 Pennsylvania registration sticker is affixed to the chrome rear fender.

In February 2020, a Honda dealer reportedly installed wire-spoke wheels with new tires. Drum brakes with cable actuation are integrated into the front and rear hubs. The seller has changed the oil in the telescopic front fork.

An 80-mph speedometer with shift points and indicator lights for neutral, high beams, and turn signals is included in the instrumentation. The five-digit odometer indicates approximately 5,300 miles, 15 of which have been ridden by the seller. Controls include horn, starter, and headlight switches, as well as brake and clutch levers.

The 1974 Honda CL125 was a single-cylinder scrambler that weighed just 196 pounds and featured a 122cc piston. What distinguishes this particular example is that it has been converted by a third-party company to fit inside a suitcase for easy transportation on airplanes!

The story begins in the 1960s, with the emergence of the concept of "general aviation." Ordinary citizens can obtain a pilot's license and travel for business or pleasure. However, once you arrive at a remote airport, ground transportation may prove difficult. Lawrence Shapiro, a former United Airlines pilot, saw a need that could be met by motorcycles. Suitcase Cycles sold approximately 1,000 bicycles before ceasing production – according to Shapiro, this was due to product liability laws. 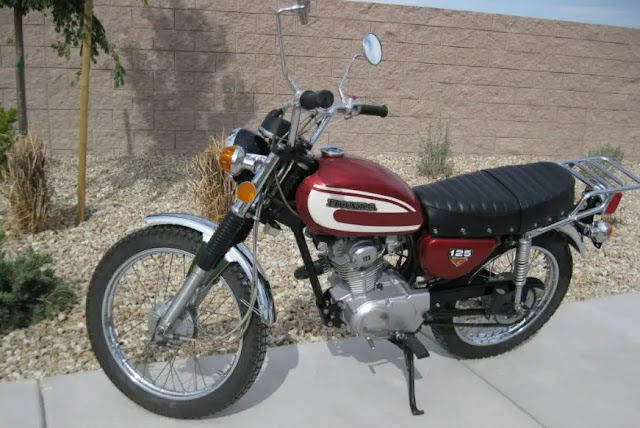